This year Nga Hoe Horo O Pawarenga Outrigger Canoe Club celebrates its 25th Anniversary, an anniversary it shares with Nga Kaihoe o Aotearoa which was also formed in 1987. From humble beginnings our sport has grown from 3 clubs to 85 clubs throughout Aotearoa. The following is a history of the Nga Hoe Horo Club which has been so instrumental in the growth, history and development of Waka Ama in Aotearoa

For Tangata Whenua the hoe and waka symbolises a sense of purpose and direction and affirms the cultural links with Nga Waka. Maori ancestry is fundamentally linked to a particular waka on which Tupuna came to Aotearoa. This connects iwi Mäori to Hawaiki - and beyond to creation itself.

1985 - Waka ama paddling was re-introduced to Aotearoa with the arrival of the Hawaiki Nui; the replica Polynesian voyaging canoe built and sailed by Matahi Whakataka Brightwell (Tohunga Whakairo) and 4 others (including Greg 'Ace' Cuthers & Francis Cowan) on an epic voyage from Tahiti to Aotearoa.

For 4 years Matahi lived in Tahiti building the Hawaiki Nui, while there he became involved in the national sport of Tahiti; Outrigger Canoe Racing (Hoe Va'a). Matahi recognized there was a place for this sport, its heritage, traditions and philosophy with which Rangatahi of Aotearoa could connect.

I read about Matahi's intended voyage in the news, about his dream to rekindle the racing of traditional canoes, and knew it was time to do something. I made sure to be on the beach at Okahu Bay Auckland, in December 1985. The Hawaiki Nui arrived and I met Matahi and spoke to him about the plan to re-introduce waka ama paddling and building in the north. Matahi encouraged me and said he wanted the same thing for the Gisborne/East Cape area.

Before I came to live in New Zealand, I paddled for Kai Nulu Canoe Club in southern California and was involved for a short time in Hawaii. I settled in Pawarenga a small rural isolated Maori community on the Whangape Harbour on the west coast of the far north of the North Island. My family and I lived there for fifteen years.
I always questioned the locals and wondered why there were no traditional Maori waka races or use of waka.

The people at the Pawarenga Community Trust got behind the dream and the waka picture wholeheartedly and helped to make it happen, by putting in place the ‘big picture details’.

In 1987 a work-training scheme was in place; I was the tutor teaching the building of canoes and making of paddles, trainees learnt the art of paddle making and using them in the waka. Ocean knowledge, surf skills and swimming were also very much essential to the development.

The Pawarenga Community Trust, trustees and administrators provided the skills for negotiations and parlaying with funding and training agencies. The crucial commitment and voluntary buy-in from the founding members of what was to become Nga Hoe Horo O Pawarenga Canoe Club (the fast paddles of Pawarenga) was ground breaking.

About this time I met Pili Muaulu a Samoan who lived at Ngunguru, near Whangarei. He told us about his father's dream to carve a Samoan Pao-Pao (a small traditional two person fishing canoe.) My friend Paul Marshall had a suitable log and he donated it to us, the canoe trainees, Pili and his family built the first Pao-Pao in Aotearoa.

In early 1987 at Ohaki Marae documents were signed for Nga Hoe Horo to became an Incorporated Society; In May of 1987 its first canoe was launched in Pawarenga, at the same time the first meeting was held at Taiao Marae to form a National Outrigger Canoe Association with the three founding clubs and the newly formed Okahu Bay Outrigger Canoe Club.

The genesis of what was Tätou Hoe o Aotearoa and is now known as Nga Kaihoe O Aotearoa (Waka Ama NZ) Incorporated.

In June 1987, Pili and I attended the first international regatta held in Apia, Western Samoa, while there; we spoke of the newly formed association and the intention to host the 1990 4th World Sprints. When we returned home, Tātou Hoe formally adopted a constitution and elected officers. Matahi was elected inaugural President, Pili Vice President, Louise Marshall Treasurer, and Raipoia Brightwell Secretary. I was on the executive committee.

In August 1988, teams from Mareikura and Nga Hoe Horo travelled to Hawaii to participate in the 3rd World Outrigger Canoe Sprints Championships at Keehi Lagoon Honolulu.

We made up one men's crew and one women’s crew.
While in Hawaii we bid to hold the 1990 4th World Outrigger Canoe Championships and won the honour. Having this honour, much had to be prepared including; the building of a fleet of sixteen, six-person canoes this job was designated to me.

The Association had to build a newly adopted International Polynesian Canoe Federation (IPCF) canoe, there were problems obtaining it and we were told by Mary Jane Kahanamoku Secretary of IPCF to "do the best you can with what you have".

The Fleet of Canoes

The first Aotearoa Waka Ama fleet began with two Tahitian style canoes, given to Matahi by Edward Mämäätua. The hull was altered as close to the IPCF canoe as possible. New decks and ama were designed and made, with the re-designing the canoes, the over-arching plan was to build for New Zealand conditions; subsequently they would serve both offshore distance and flat water sprint racing and this gave us the prototype 1990 Canoe.

The resulting canoes were the nucleus fleet for the Aotearoa 1990 4th World Sprints Championships held at Orakei Basin in Auckland which was a resounding success. The 1990 Canoes remained the most popular design in New Zealand until the advent of the Mahimahi. Waka ama in Aotearoa was finally and really up and racing so to speak.

The Outrigger canoe sport in Aotearoa has enjoyed phenomenal growth over the ensuing years and New Zealand paddlers have enjoyed many international successes.

The Logos;
‘Te Toa’ The Warrior is a symbol that our youth relate to reaching for excellence on the water, and applying the learned skills to all facets of their life. ‘Te Wahine Toa’ The Warrior Woman symbolises that women are able to attain strength, ability and skills to add to those that are traditionally valued. ‘The Waka Ama team’ symbolises Whanau and Hapu determination.

At the beginning, in common with Mareikura, and Mitamitaga, Nga Hoe Horo was hapu and whanau based in Pawarenga. Over the years the club has extended to include Taurahere and other groups and individuals outside of Pawarenga.

The history of Nga Hoe Horo is fundamentally linked with that of the foundation of Waka Ama in New Zealand. Nga Hoe Horo and Mareikura were pivotal to the introduction and promotion of youth competition.

In 1994 a submission was made by Tätou Hoe representative Matahi Whakataka Brightwell to the International Pacific Canoe Federation (IPCF) to include a J16 division at the 4th World Sprints Samoa; Matahi was successful and the division was included as a demonstration event.

The introduction of Midgets and Intermediate grades to the National competition was also driven by Nga Hoe Horo and Mareikura the history lay in the purpose of reviving the tradition of Waka Kaupapa Maori.

At that time Nga Hoe Horo was helping to build the foundation for the future of the Outrigger sport. Now many of our then junior paddlers are coaching and paddling in elite divisions.

Since 1990 Nga Hoe Horo has offered a youth development programme that uses the sport of Waka Ama as a vehicle to enhance the skills of our youth, the programme remains a mainstay of the Club to this day. Since 1987 the club has experienced many changes in the Waka Ama scene from 3 clubs that supported each other by holding a competition circuit between Pawarenga, Whangarei and Gisborne and back to the start again, to the now 85 clubs nationally with more paddlers than you can invite to lunch, has been amazing to watch.

The whanau of Nga Hoe Horo honours and remembers those of the club who have left a legacy that is now an everyday part of life and experience in Aotearoa. We celebrate those who continue to participate and those who have gone on to share their skills with other clubs.

Nga Hoe Horo World Participation;
1988 IPCF 3rd World Championship - Oahu Hawaii
- Nga Hoe Horo Open Women Compete
- Nga Hoe Horo Open Men Compete including 12 year old Maui Kjeldsen
1990 4th World Sprints - Okahu Bay Aotearoa
The whole club prepared to compete internationally. At home on the Whangape Harbour teams trained with Kris and Bo being the main coaches, canoes were built, paddles were made (so heavy) and uniforms were designed. The time arrived and the whole village came to see us off. We transported our canoes, food and people. A very memorable week ensued. ID cards were type printed and photos stuck on by the club administration – the days of online registration were not even a dream!! A great adventure and huge learning curves were held and gained by all.

On Saturday 8th December we will host our 25th Annual Regatta. Come and enjoy the occasion and celebrate a wonderful 25 year journey!

97,489 paddlers have looked at this page 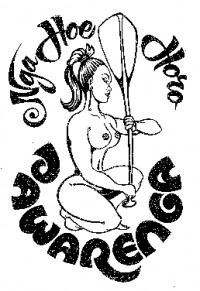 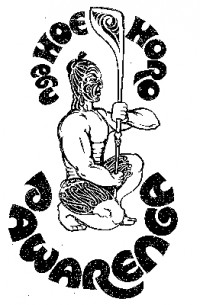